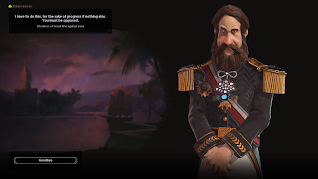 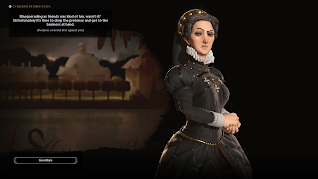 This is a recap of turns 71-80 of our Civilization VI Blogger Succession Game.  The participants are:

I have regularly played all the Civilization games started with the initial one but I had never played Civilization VI, so I am hoping I can learn from others and not mess things up too bad.

Once I ended the initial turn, I was immediately confronted with two declarations of war (see pictures above)!  This made me nervous because the cities were not very well protected but as time went on I realized that the two countries that declared war didn't have cities or armies anywhere near us, but still it made me cautious.  The next, much more mild revelation was that we researched the wheel. I made the decision to research Currency since we already had the bonus so we could research it in half the time. 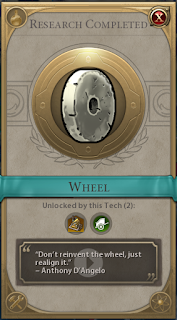 Most of the turns were pretty uneventful but I we did complete mysticism during turn 75.  This gave me the option for a free government and policy change but then I determined we didn't have the prerequisites for any other governments and that we could use any of the new policies with our basic government type. 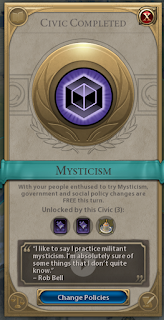 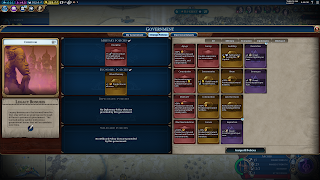 Partially for this reason, I show the Political Philosophy Civic next.  I think this also worked out well because later during my session, one of my actions cut the time to learn it in half.  I also was able to establish our fourth city.  The settler was on it's way to a suggested spot at the beginning so I just let it go the rest of the way through automatic movement. 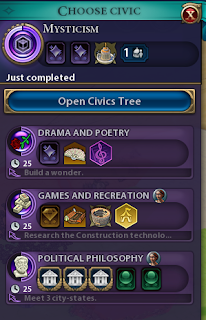 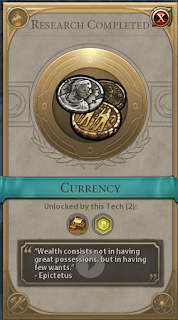 On turn 79 a barbarian encampment showed up between two of our cities so I started making preparations to remove it.  On turn 80, Currency, which I started at the beginning, completed and I started Celestial Navigation.  It works well with Victoria's bonus and our several coastal cities but our coast is on the southern most end of the continent, closed off by land on both ends so it limits what we can do with ships.  Now it goes back to Naithin.  He'll have a very different situation from where he was on turn 10!