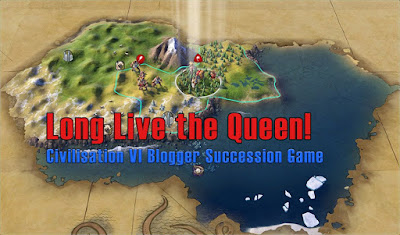 This is a post in the Civilization 6 succession game started as part of the Blapril event.  You can see the participants and all the previous posts here.

After reading Rambling Red's post, I knew he had set me up for both founding a religion and to learn gunpowder.  I spent turn 151 just looking around and understanding where things stood.  However, turn 152 was a major one since England founded the fourth and last religion with the arrival of the great prophet Madhva Acharya.  I chose Buddhism because the other religions were all western.  At that point I needed to choose two beliefs.  I chose a first that would help with culture and a second that would help with science since we were leading in science and wanted to us faith structures to help there as well.

There were also several warriors that I wanted to upgrade to swordsman so I found a Iron tile just outside of Birmingham.  There was a builder there so I was able to immediately upgrade the location with a mine.  I also killed a nearby Barbarian scout and sent the troups back to Stoke-upon-Trent, the nearby city. 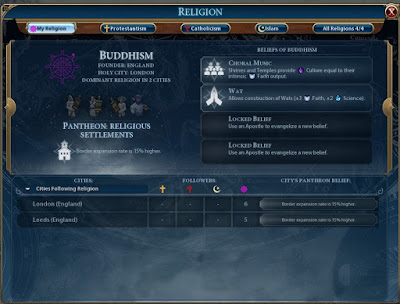 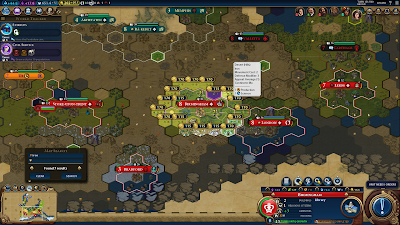 At turn 153 London produced a temple and I set it to producing the Mahabodhi Temple hoping it will help spread our religion to our other cities and resist influence from the other religions.  I was also able to start a new trade route from London.  I also had Stoke-upon-Trent produce an Aqueduct to help them continue to grow.

For turn 154 I was able to add a new Wildcard policy and I chose one that would provide and extra two points per turn towards getting a Great Scientist.  Also, Stirrups completed and I chose Education as our next technology since Gunpowder was going to take significantly longer. 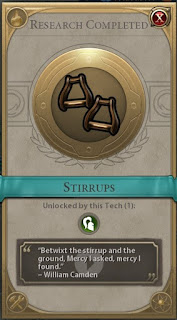 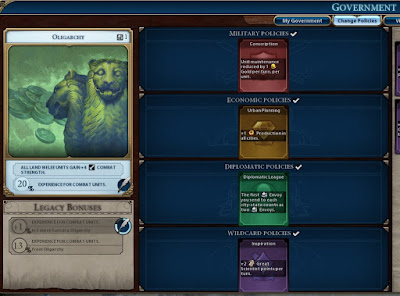 Turn 155 Pedro came back to declare war against me as he had on my previous turn.  I don't know why he doesn't like me.  He still isn't very close and isn't that strong militarily so I wasn't too worried.  Bristol, our remote city far to the northwest, spotted a Brazilian scout right outside and was able to eliminate them with the bombardment because our previous leaders had wisely built a city wall.  We will need to do this in other cities as well. We learned Civil Service but I decided against a policy change.

There were a crossbowman and archer in the SE corner that were attacking some barbarians.  I attacked the ones I could see but one killed my archer before my crossbowman killed him.  Then I sent my  crossbowman back to our towns, several turns away.  I also had enough funds to upgrade one of our warriors to a swordsman to better defend the empire. 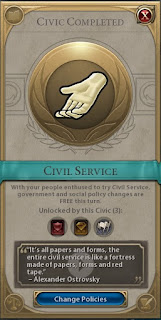 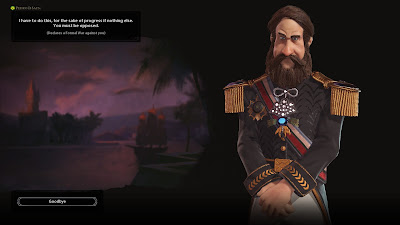 The last few turns were less eventful.  We completed our research into Education and start on Gunpowder.  I decided to send our next Envoy to Stockholm in hopes of eventually having their scientists help with our research.  Leeds started building a temple to our newly founded religion and I had the funds to turn their warrior into another swordsman.  Finally our southern icebound city of Bradford started a Granary since they need all the help they can with growth. 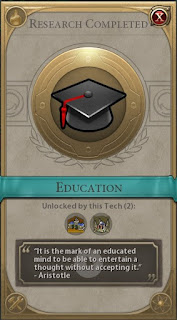 I turn the Empire over to the very capable hands of Naithan and will look forward to the continued prosperity of the English Empire.
Posted by Kanter at 9:59 PM

Email ThisBlogThis!Share to TwitterShare to FacebookShare to Pinterest
Labels: Civilization