Finished with Battle for Azeroth


This week I decided I was done with Battle for Azeroth (BfA) in World of Warcraft (WoW).  I completed an emissary quest and an invasion for the Honorbound and that gave me the reputation I needed for the rest of the Vol'jin quest and the Mag'har Orc allied.  I look to see how much time was left on my monthly subscription and there was a week left so it seemed like the right time to unsubscribe.

The question was what did I want to do during that week.  I knew I wanted to the Vol'jin quest so that was first on the list.  I enjoyed all parts of this quest line and as Alliance only, I never would have seen it.  It'll be interesting to see how this gets investigated more, I am assuming it'll be within the Shadowlands expansion.
After the Vol'jin quest, I decided to confirm I had all the Horde allied race quests.  I decided to do the Zandalari introductory quest since I was interested to see how it was handled.  You help her with some activities to become queen and see her address the people as queen.  It was good to see Queen Talanji hold her own with Sylvanas but certainly not as interesting as the Dark Iron Dwarf quest line.  I decided the Mag'har Orc and High Mountain Tauren weren't different enough to do now. 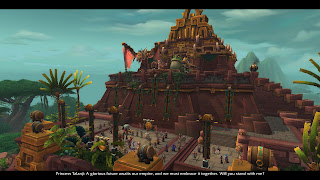 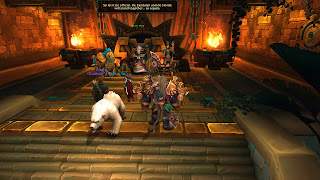 I confirmed I had the Kul Tiran Humans, Void Elves, and Lightforged Draenai available.  Since I already did the Dark Iron Dwarf questline, that only left the Mechagnomes that I already decided weren't worth the reputation grind.  Instead of the other Allied races whose reputation quests are available as World quests in either Legion or the main BfA continent, Mechagnomes require travelling to a separate island to complete the quests and don't have any champion missions.  I don't see it as worth the grind.
Since I have quite a few Alliance characters, I didn't have much incentive to complete these quests.  I can do them any time.  However, I only have one Horde character and I had missed the Demon Hunter questline along with most of Legion so I decided to create a Horde Demon Hunter as my last task in BfA.  Odd it's a Legion task, but I have spent a lot of this end time in BfA discovering what I missed in Legion.  With the experience buff I was level 105 by the time I finished the introductory quests and got the first Legendary weapon.  The quest line was fine and a good length but would have been much more interesting while I was doing the 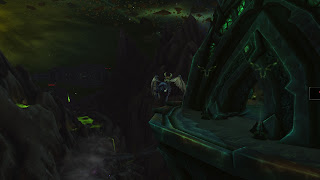 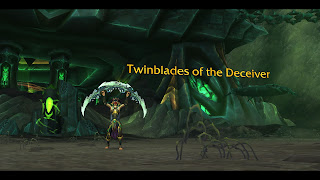 As of yesterday, my access to Wow is gone.  It's a relief in one way in that there isn't much that I want to do.  In another way it's always difficult when I don't have an MMO that I'm playing.  I may join back for the pre-Shadowlands patch.  That would be nice to see an would be a good opportunity to level another Horde character (probably a Vulpera warrior) to have available for when I do play Shadowlands.  I'm going to try to wait to actually buy and play Shadowlands after the first or second major patch happens but when I read about peoples it might be difficult.  I'm not sure what this means for this blog.  I'll still be posting my Civilization turns and I have ideas for other posts but my experience has been previously that when I'm not playing an MMO I don't post.  In any case, thanks for reading and the blog will still be available for me when the urge to write returns!
Posted by Kanter at 10:00 AM No comments:

I am still hoping to get to exalted with the Zandalari Kingdom.  I finished one set of emissary quests and one invasion set of quests in Zandalar.  This has put me at 18000 out of the 21000 reputation needed.  Two sets of emissary quests will definitely get me there.  I was able to get to exalted with the Honorbound which openned up the Mag'har Orc allied race.  Since I wasn't doing too much I completed the introductory quest lines for the Vulpera and Nightborne races.
I did enjoy the Nightborne quests in Suramar though the reputation grind and stealth mechanism got old at times.  I was a little disappointed how short the allied race quest was, but I guess when you spent as much time on quests to free an allied race in Legion, you don't need a long introduction.  It was one simple short scenario primarily explaining why the Nightborne are Horde and not Alliance.  I questioned that myself but I guess I shouldn't be surprised by the arrogance of elves.
The Vulpera quest line was longer but still pretty straight-forward.  The short version is Kiro asks to join, Blaine refuses because the Horde has too many responsibilities, the Vulpera take care of three issues with your help, Blaine realizes the Vulpera will help rather than be a burden and invites them to join.  The three questlines are pretty fun and include some more time with Dolly and Dot but nothing too exciting.  I much preferred the Dark Iron Dwarf questline but we had spent a lot of time helping both the Vulpera and the Nightborne and I guess a bigger introduction to the Dark Iron Dwarves may have been required.
Posted by Kanter at 10:00 AM No comments:

This is a post in the Civilization 6 succession game started as part of the Blapril event.  You can see the participants and all the previous posts here.
You won't be getting as many screenshots this time.  I was hitting F12 but for some reason it only took the first and last screenshot.
The first thing that greeted me at the start of my turn was Pedro asking for gold.  I guess he is just one of those people who thinks it doesn't hurt to ask.  I usually don't like those people.  I also saw a notice that the City of Toronto was defeated.  I didn't see who conquered them. Our kingdom has had very good relationships with all the city-states so I disappointed one is now gone.
The Barbarian encampment to the southeast that Rambling Redshirt mentioned was an irritant throughout my turns.  I chipped away at the Musketman near Sheffield on my first turn and it was defeated after two more turns.  I started heading troups, including a crossbowman that was exploring the coast, to the encampment once the immediate threat was gone.  I also started looking at upgrades and upgraded a Spearman to Pikeman.  I made one more upgrade on my last turn but kept most of the gold we had for future needs.
On turn 232 the Exploration Civic completed. I did not change government but there wasn't anything in Economics policy, decide on Trade Confederation to help both science and culture.  We also started working towards the Mercantilism civic.
Spread Buddhism to Carthage with an Apostle.  It said it would happen in 200 turns but that seemed a long time to wait.  Bristol completed lighthouse, was going to build aqueduct to allow more growth but didn't want to destroy pasture to do it so made monument for quick culture boost.
On turn 234 Catherine De Medici asked for embassy, decided to allow since France isn't close and a war isn't likely. A settler was built in Birmingham but I didn't know where does it should go.  I started building a temple there, and sent the settler started towards Leeds and will let next leader decide where the city will be founded.  There is a favorable spot between Leeds and Sheffield so I sent it there but Naithin may have a better idea.
There were 4 Barbarian Quadriremes surrounding our Caravel. It was strong enough to pick them off one at a time, but eventually it was injured enough I sent it back to friendly territory to heal, a long way away from where it started.  I also took our Admiral to see if there is an island in the unknown area but he or she didn't find anything.  Hopefully some of the players know better how to use it.
On turn 235 a Musketman was created in Bradford and we started building monument for culture.  Leeds bombed barbarian scout.  It seems the Barbarians sent a few scouts our way but fortunately none that I saw got away. Bristol completed monument, we built a holy site.  We also sent 2 envoys to Yerevan since no Suzeain and no envoys yet.
On turn 236 Leeds completed the monument, needs to grow so decided to see if builder will help. Accepted friendship from Cleopatra (though rather arrogant way to ask).  I thought I took a screenshot but it was something about how some people would do anything for her friendship.  Research completed for Industrialization, researched sanitation since many cities limited in growth options (Bristol, Bradford, Leeds).  The water mill was completed at Plymouth, made walls in case war starts.
On turn 239 Mercantilism completed, started Diplomatic service and on turn 240 Birmingham completed a temple and started a Wat.  It wasn't a very eventful set of turns.  We still have a good lead in the Conquest and Science scores.  No one seems likely to get a Religious or Cultural victory but we might need to be cautious of Cleopatra, our ally, since she is showing very slightly ahead of us on the total score.
Now back to Naithin!

Posted by Kanter at 3:48 PM No comments: