This is a post in the Civilization 6 succession game started as part of the Blapril event.  You can see the participants and all the previous posts here. 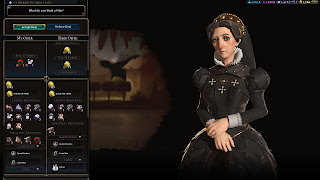 Queen Elizabeth started off with offers from Gilgamesh, Katherine and Cleopatra. Well Gilgamesh just wanted something for nothing but I considered the Katherine trade to help with the relationship but decided against it all of them.  Norwich started on Sewers to help them grow.

I only used a couple builders on turn 312 but did get notification that America entered the information age.  Odd since they have so many fewer science discoveries but I'm not so concerned since we are still well ahead in science.

Two of our English cities do not have enough housing to grow.  This became much of the focus for this reign. 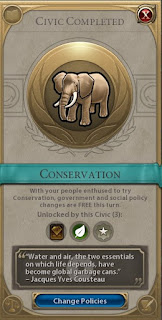 The English Civics researchers discovered Conservation started researching Urbanization.  Hopefully both of these will help with growth and Urbanization will open up Mass Media which will be boosted.  Eridu started a builder to help that city grow.  We received additional envoys.  There were no bonuses to be gained from our existing city state relationships so we sent three envoys to Hong Kong to start our relationship with this city-state and gain the bonuses from it.  Speaking of city-states, Preslav was asking for a trade route and Stoke-Upon-Trent had one available so the route was established. 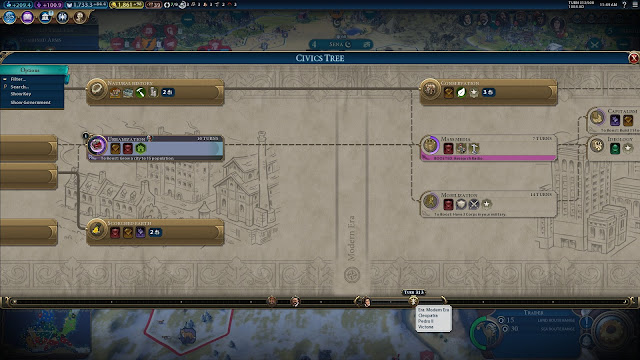 There were only builder movements in turn 314 and only the construction of a shipyard in Bradford on turn 315.  Looking at the options this would at least allow for more production when we started the space race. 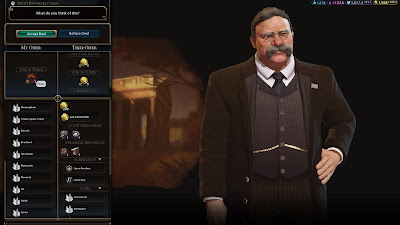 There were two trade offers this turn.  Roosevelt offers gold for Niter, turned down.  I forgot to take a screenshot of the offer we accepted from Cleopatra for Nitre for Gold and Coffee.  I am hoping to keep relationship with her good since she is right on our border and no one else likes us.

Bristol created the wonder of the Colossus!  The citizens started on a temple there but I wonder if we need to convert them to Buddhism.  Bristol was busy this turn with a trade route available that we sent to Paris to help with our next best relationship.  Another city started a trade route to Calais also in France.

Turn 317 was actually idle and turn 318 had us gain two more envoys.  I will let the next ruler decide where to send them since there were no bonuses available.

On  turn 319 London acquired what I believe is our first  archeologist that I sent to site south of Norwich built Royal Navy Dockyard and Ur started on an Aqueduct to continue our focus on growth. 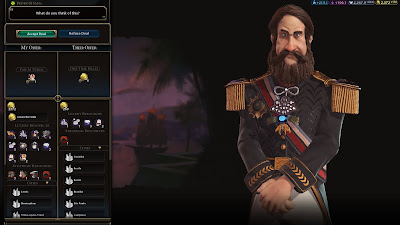 Pedro offered only 6 gold for a pigs which seemed almost as bad as Gilgamesh asking for gold for nothing.    Also Plymouth completed University, made Builder to continue my pattern of growth focused decisions.

Our reign ends and it returns to Naithin.  There are still 36 turns for Spaceport from Leeds but it will be built and we may have started on the second step before my next turn as consultant to the queen.

Email ThisBlogThis!Share to TwitterShare to FacebookShare to Pinterest
Labels: Civilization